Who Are The Paw Patrol Characters? (And What Are Their Catchphrases) Paw Patrol is a Canadian television series created by Keith Chapman that has become a top-rated show with kids as they follow rescue dogs that perform professional careers. The series is on Nickelodeon in the United States and even has live events in major cities across the globe. Even the feature film has now become available on DVD that kids can watch whatever they want.

Since Paw Patrol follows a bunch of different kinds of pups as they go about their rescue professions, it can be a lot of characters to keep up with. Parents may find their children talking about all of these different names that they don’t know how to link to the characters. Luckily all of the characters have distinct designs to help you keep track of them.

The following article is going to go through some of the most popular characters from the Paw Patrol franchise and tell you a bit of who they are, what their occupation is that they are associated with, and what their catchphrases are so that you can always keep up with your kids while they’re enjoying the episodes.

Ryder is a human character within the PAW Patrol franchise as the leader, rescuer, and teacher for the pups who work in rescue professions. She helps via Paw Patrol with the different skills they need to finish a job, and he is in charge of transporting them to other scenes, whether that on an ATV or a snowmobile.

Ryder is the main protagonist of Paw Patrol because he is the standing for the audience watching the show. He has a light skin tone with dark spiky brown hair and brown eyes. He wears a red, white, yellow, and blue vest, which matches the PAW Patrol logo’s colors. He also wears blue jeans and has blue and white shoes. He also appears in every episode.

Ryder is knowledgeable and creative, even at ten years old. He is in charge of training each of the puppies and their own specific professions, whether a firefighter dog or a police dog, and he also invents all the gadgets the PAW patrol uses for rescues. Ryder is the first person to come up with a solution to any problem. 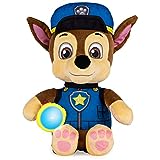 Chase is a German Shepherd puppy who is another main character after Ryder and is distinctive by his police dog uniform. His primary job on the PAW Patrol team is to keep things in line and redirect traffic during an emergency. Another one of his jobs is to attract missing animals or people with his spy gear.

Since Chase is and German shepherd, He is distinctive by his brown fur covering his body with a lighter tan fur around his face and paws. He has a long tail, and he wears a hat blue police uniform with a hat and yellow trim. His police uniform has three yellow chevrons on each side, giving him the rank of a police sergeant.

Chase tends to be a very mature character as he is the leader among the nonhuman characters. He takes things very seriously and is loyal and obedient to the other Paw Patrol members. His owner is Ryder, and he is very protective of him and wants to make him proud. 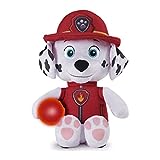 Marshall is a Dalmatian puppy and the third member of the Paw Patrol team. He has distinctive in his firefighter outfit, and his primary purpose is to check for fires and extinguish them. He’s also a medic and uses his X-ray screen to check people for broken bones and other injuries.

Marshall is easy to recognize with his white and spotted fur covering his whole body and bright blue eyes. He usually wears a firefighter helmet and a red vest to match when on rescue missions. He also has a water cannon which he can use when attaching it to 8 fire hose to put out any fires they encounter. He also has a medical kit.

Marshall is usually the comic relief in the PAW Patrol team as he tends to be goofy and clumsy. He’s pretty accident-prone and ends up with many slapstick scenes of crashing into things and falling off of ladders. He’s also very excitable and a little bit of an airhead and can even be immature at times. But he’s also quite agile. 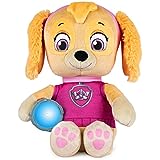 Skye is a female cocker spaniel and poodle mix and is the first female member of the Paw Patrol. Her primary purpose on the team is to keep a close eye on her helicopter’s emergencies and use her helicopter’s grappling hook to save and transport people they’re rescuing and team members.

Skye is distinctive with her magenta eyes and her special pilot outfit in pink. Skye is also the smallest member of the Paw Patrol and has shaky ears and a fluffy head with circles of golden brown around her eyes. Her legs, snout, and belly are a cream color, while the rest of her body is a golden brown. She also has three tiny eyelashes for each eye.

Skye is a fun-loving pup who likes to participate in fun activities such as the Pup Pup Boogie with her fellow Paw Patrol team. However, she can also be competitive against Zuma at one of the other members. She’s energetic and very enthusiastic as she shows off her giggle bark and her backflips. She’s not afraid of heights and loves getting to fly around in her helicopter. 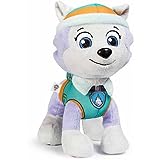 Everest is a female husky puppy who came into the PAW Patrol team in season 2 and is the ninth overall member of the team. Her primary purpose is to clear snow from the roads during emergencies and use a grappling hook to get from place to place. She’s also the oldest pup at eight years old.

Everest is a husky puppy with grayish lavender fur and white fur on her paws, chest, and belly. She has blue eyes and white ears. She wears a knitted yellow and teal hat, which she is rarely without, and a teal jacket with orange trim and white fluff around the collar.

Everest is a very enthusiastic and helpful pup who loves being part of rescues. She is close friends with Jake and is very affectionate towards him. She made quick friends with Jake when she offered him shelter in her Igloo while there was a storm. She’s also hyperactive and has more of a tomboy feeling by enjoying activities and nature. 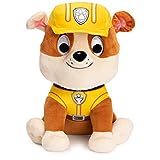 Rubble is hard to miss with his bright yellow outfit. Because he is a construction worker and all of his gear is yellow and includes a yellow hard hat. he also has brown fur with a white belly and paws. He has brown eyes and a tiny tail that is hard to see unless you know what you’re looking for.

Rubble may have an exterior that suggests a tough personality, but in reality, he’s more emotional and has a soft spot for animals such as kittens. He even will use cute pet names for the animals that he encounters. He’s very playful and loves to laugh and make jokes. Rebel was one of the animals that the PAW Patrol rescued. 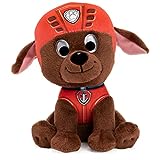 Zuma is a male chocolate ls a puppy in charge of water rescues on the PAW Patrol team. He rescues see animals and people with underwater emergencies. He also represents the only pup on the team with a speech impediment that makes it difficult to pronounce his R’s correctly.

Zuma has all brown fur with floppy ears and Amber eyes. He has a dark blue collar with an orange tag on it with a silver anchor symbol to represent his love for the sea. He also wears bright orange gear like his water helmet, making him easy to pick out.

Zuma is a very laid-back and calm character, and his fears are more subdued than the other pups. He’s very loyal and has a sunny and optimistic Outlook. However, he can also have a competitive side as he and Skye tend to have a friendly rivalry at times. He also sometimes uses surfer slang which fits with his ocean rescue theme. 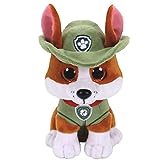 Tracker is a Jeep driving pup with extraordinary hearing and lives in the jungle with Carlos. He is the eighth member of the Paw Patrol and is a chihuahua. He’s also bilingual, speaking both English and Spanish fluently. He’s also known to play at the flute to help the team.

Tracker has brown fur with white on his belly, face, and pause. He wears a red collar and a green tag with a compass picture. He wears a dark green hat and vest, but he had a red bandana around his neck before he got this specific year as a member of the Paw Patrol.

Trucker enjoys playing various activities outside, especially with wildlife in the jungle. He often uses his hearing abilities to save people from danger because he can hear them in distress from a long-distance away. While he is generally courageous, he is terrified of the dark and is sometimes easily spooked by sounds because of his sensitive hearing. 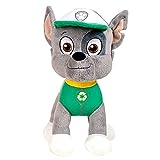 Rocky is the fifth member of the Paw Patrol team and is a mixed breed Eco pup. It’s unknown what his exact breed is, and it seems to be a mixture of possible things like a terrier. His primary focus is on Recycling and other Environmental related issues.

Rocky is noticeable by his light grey fur over his whole body with darker patches around his eye. he also has white for his paw. He has orange-brown eyes. He has a floppy right ear with a nick on his left ear. His standard uniform tends to be a green vest and hat with an orange color with a recycling sign on the tag.

Rocky’s primary duties involved recycling as he tries to reduce, reuse, and recycle anything you can find. He is knowledgeable and often finds new ways of using the materials. He’s very resourceful in that regard as he’s able to find anything lying around and come up with clever uses to help him in any situation.

Hopefully, now you have a better idea of who some of the main characters are of the Paw Patrol so that you can keep up with what your children are talking about as they enjoy the show. The great thing about Paw Patrol is that all the characters have distinct designs that can help you keep track of them. 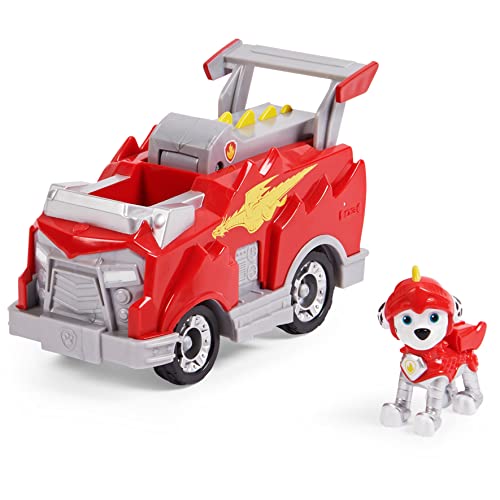 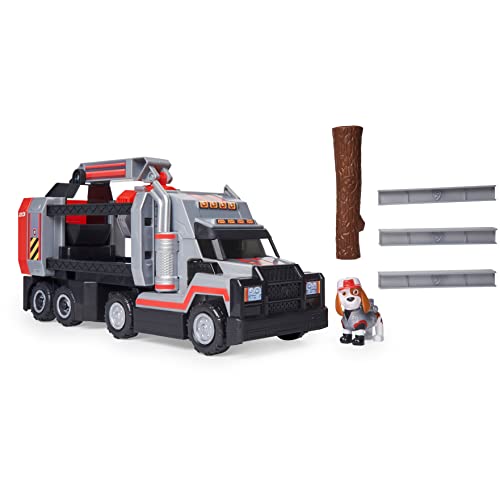 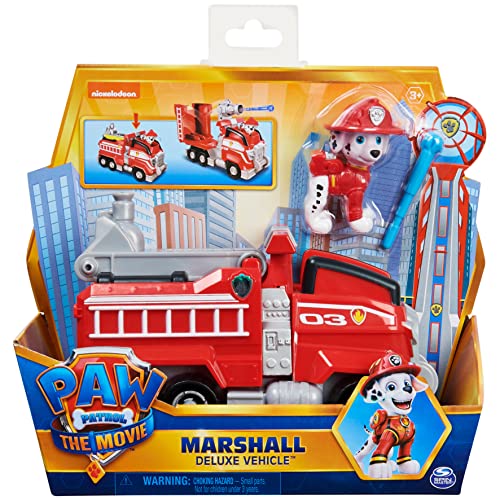 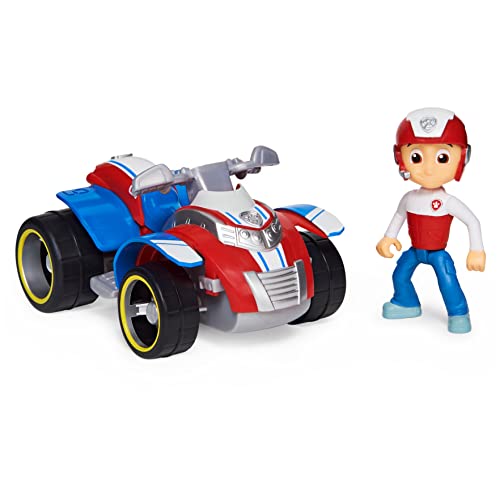 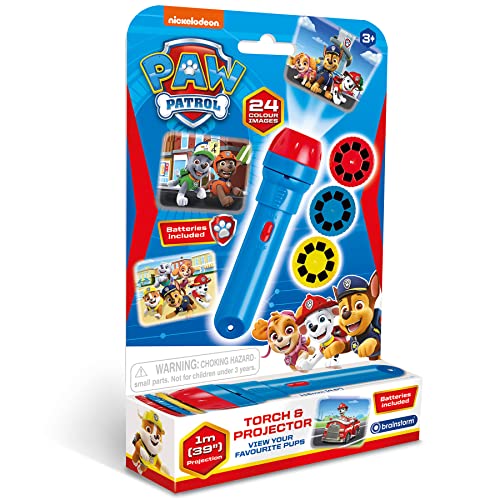