Different parts of the country have soft or hard water. Hard water is water that has travelled through certain types of rock, including limestone, chalk and dolomite, and has forms (salts) of calcium and magnesium dissolved in it, such as calcium carbonate, calcium bicarbonate and calcium magnesium carbonate.

Soft water has usually travelled through peat, igneous rock or sandstone sources, and does not contain as much calcium and magnesium.

Put a bit of grated soap in each bottle, put the lid on tightly. Shake the ‘hard’ and ‘soft’ bottles. Which has more bubbles? What else is there? Now shake the ‘tap’ bottle – is the tap water hard or soft? Try the experiment again with a drop of washing up liquid.

What happens? Soap reacts with the calcium and magnesium salts to form ‘scum’, which is insoluble in water (this is what makes rings round the bath). This means there is less soap for making bubbles, or for cleaning. Detergents do not form scum, but the calcium and magnesium salts react with the detergent, leaving less for making bubbles, or for cleaning. People in hard water areas have to use more soap and detergent than people in soft water areas.

Water in homes can be softened using salt – however, this water has too much sodium for drinking and cooking, so there will be a separate tap for drinking water.

When heated, the soluble calcium bicarbonate in hard water changes to calcium carbonate. This is not soluble in water and forms a white layer on the inside of the kettle or pan, called limescale. Limescale also forms when hard water evaporates and leaves behind calcium carbonate and the other dissolved calcium and magnesium forms, for example on taps and tiles.

Look inside a kettle in a hard water area – it will have a layer of scale, or even lumps and flakes of limescale on the inside, and cups of tea may have gritty bits at the bottom. Calcium carbonate and calcium bicarbonate react with acids (see ‘Acids and Alkalis: Making Gases’ and ‘Acids and Alkalis: Which Are Which?’). Try pouring vinegar into a kettle that has a layer of limescale at the bottom. The acid will react with the limescale, turning it into a soluble form of calcium and carbon dioxide. Does it work with lemon juice? Does it work more quickly if the kettle boils? Rinse the kettle out carefully before making a cup of tea.

Advantages and Disadvantages of Hard Water

Things that heat water, such as kettles, washing machines and boilers develop a layer of limescale in hard water areas, which can cause problems. Taps, shower heads and pipes also develop limescale, as do places where water splashes, such as tiles and shower curtains. Soap scum can build up in baths and sinks.

People need to use more soap or detergent in hard water areas, and drinks like tea might taste or look different. However, water for bread baking needs to have some minerals in it, otherwise the bread dough will be too sticky. 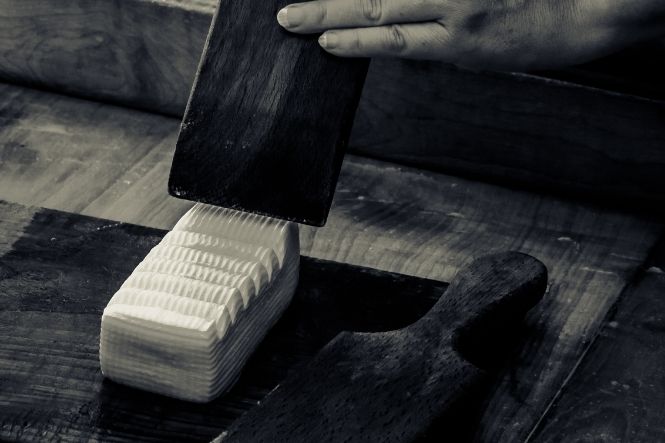